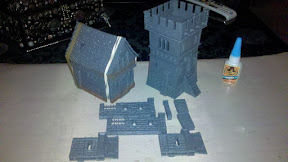 Spent a rare moment of free time assembling some Warhammer Scenery I’ve been sitting on for several years now. When WHFB 7th Ed. launched, they put out a metric boatload of scenery kits. In their typical launch fashion, they put out big kits with decent discounts. I don’t recall what I paid, but it was worth it enough to buy, esp. adding in the usual discount from The War Store. One box was a buildings box, which contained enough bits to build the Fortified Manor House (1x Walls & Fences, 1x Chapel, 1x Watchtower), 1x Building Upgrade Sprue), an additional Watchtower, Chapel and 2 more Walls & Fences. It’s a pretty sick box, (in fact I found someone selling one on eBay). The other box contained the rest of the then new terrain offerings, (Arcane Ruins, Hill, Modular Hill, 3x Woods).

The bases for the woods and both hills have been spray primers a deep, earthy brown for about 2 years, so it’s about time I got off my ass and did something with them. The buildings, of course, have been sitting on a sprue this whole time. I’ll say this about the buildings. They go together better than the Cities of Death buildings, but they are still a bit iffy overall. Multipart walls which have to be assembled first, then to each other, are too prone to hiccups and snags. I don’t like wasting time on terrain filling gaps, but I’m afraid the greenstuff will still have to come out for these. They are pretty sweet to have after all this time, esp compared to the hardboard Mordheim terrain.