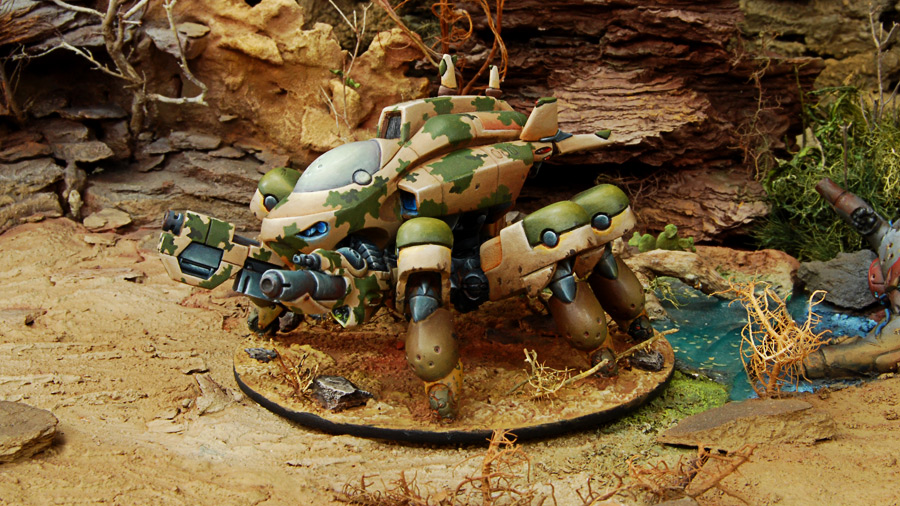 As a Tabletop Wargaming enthusiast, the hardest part of the hobby, (aside from being able to afford it, and find space for it, and find time to model/paint/play… sheesh!), is often deciding which system to get involved with. There are SO many available, more than ever before. Will you find others to play with? Is it worth investing in? Are the rules easy to learn, but hard to master? Is the game fun? Are the models cool? I am often staggered at the sheer volume of choice in the hobby today.

When I first got started, oh 30-some odd years ago, I was a pre-pubescent lad with a healthy imagination, (far different from the soon-to-be pubescent imagination!). As my father taught English, I learned to read very early and I grew up reading far in advance of my school years, (Bulfinch & Hamilton mythologies, Tolkein, Dante, Herbert). This made it very easy for me to journey to far off lands of fantasy and danger in my head. It wasn’t long before I had my first D&D Basic edition, pink box and all. Thrown in a box of Grenadier minis and a few odd paints and before you know it the world’s worst painted Shambling Mound was chasing my neighborhood pals through whatever dungeon we found interesting that Friday night. And thus, an addiction was born.

Flash forward 3 decades. My years of being a capable athlete more or less behind me. As a happily married man, my days of chasing tail all night are assuredly long gone, (of course I still get to chase my lovely wife’s tail! I ain’t dead yet you know). My bank account, while not Trump-esque, ain’t exactly the meager pittance it once was as a starving college student either. I have the luxury of grabbing the occasional impulse buy or adding to the collection without fretting over my power being turned off. Even so, we come back to the overwhelming volume of choice in what to buy and play. When you already support multiple game systems, (Classic BattleTech, Warmachine/Hordes, Warhammer in all it’s forms), does one REALLY need to try to support another one? Well, before this week, I’d have said not really. However, at this moment, the answer is an overwhelming YES!

Thanks to an old article I only recently read on Beasts of War, I finally took a good look at Infinity. Sure, I had seen the occasional Infinity fig on CMON or some such, but I never gave it a serious thought. That is until I read the game was based on D20 and not the ubiquitous D6. My biggest complaint of the typical mini game is that the D6 rules the roost. Bullshit. Even when it’s 2D6, that’s still only a 1 in 36 chance of any given result. I can win at roulette with the right plan and those odds. I read D20, and then I saw this. Set 175 years into Earth’s future, Infinity takes everything you know & love about Mecha Anime and shoves it right down your throat like a honey-glazed ball-peen hammer.

The models are some of the finest overall sculpts I have ever seen. The source material reads like some of my favorite Anime, (DesertFoxx had to watch Appleseed after I introduced the link to him). In reading support forums, FAQs and the quick start rules, I can say that this game seems to have some of the deepest strategic & tactical gameplay elements of anything I have ever played. And the buy in price is unimpeachable. First of all, the ENTIRE ruleset is downloadable for free. Sure, you can buy the book, but in the try before you buy category, having 100% FULL rules available via PDF is better than anything a certain UK company would try. They even have an online tool to build and proof your army list, again free. Starter sets for every faction consist of 6 figs and are a complete 125pt force for $38 thanks to the discount rate at The War Store. The standard size game is approx 300pts and from their suggested starter armies, one can be playing full size games for anything from $72-104.

As DesertFoxx put it, this is Necromunda on steroids. Instead of the Grim Dark of 38,000 years in humanity’s future, this is only a couple centuries from now. Instead of a desperate struggle against the inexorable advance of the End Times, this is a ‘what if’ argument in which humanity’s typical struggles and conundrums are set against the backdrop of AI and the dawn of interstellar travel. Instead of Space Marines, we get Mecha.

When you already have invested half of a lifetime in pewter & plastic for multiple game systems, does one REALLY need to try to support another one? Before this week, I’d have said not really. However, at this moment, the answer is an overwhelming YES! Hello Ariadna, welcome to my home…

One Response to “So many new and interesting things!”