It’s official, all the kids are finally at home! The last of my errant Tau figs arrive on 07Sep12 along with my Flames of War project, (details in a separate thread). March 2011 to September 2012, kind of a ridiculous time frame, much of which has already been detail in other posts. Still, I’ll take some time to film the entire lost all in one go and post up unit bios as I have time. At present, the force totals out at 3316 points, with 3061 painted courtesy of PaintedFigs. The remaining 255pts are 3 Broadside Battlesuits which I am converting to have their railguns under-slung on the arms with custom ammo feeds. Anyway, until I get to showcasing everything about the models, the experience, etc, feel free to waste 15min watching me unbox the whole kit & kaboodle on YouTube.

Buzz from the bees is that there is a package from Sri Lanka at home. Could it be that my army is now complete? Time will tell, (and so will the FlipHD). 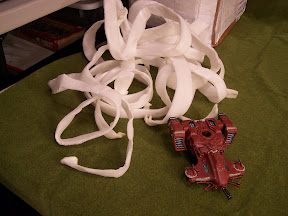 That wrap is gangsta!

The majority of my Tau have finally returned home from Sri Lanka. I don’t have time to go into EVERYTHING in the depth I would like to, but I wanted to post up some flava real quick about where things are at. Each of these will get some quality time in a post of it’s own soon, but here’s the short version, (hahah, me with a short version HA!). Queue The Ecstasy of Gold.

The Good: Having my models back, lots of paint.

My models are back in my hands. Not counting the extra bitz I had originally ordered, to replace everything I sent overseas today would cost approx $650 retail. Admittedly, accounting for the Apocalypse 3 tank box, eBay and The War Store I got all of that in my hands for less than $400 between 2007-2011. Still, sending that much plastic around the world and finally getting it back is a good thing.

Also good is the overall quality of the paint work on the Firewarriors, Kroot and Stealth suits. Saving me from having to paint over 100 infantry is DEFINITELY GOOD! This isn’t to say the paint on the tanks, drones, Pathfinders or Ethereal isn’t also good, but the bulk of the army on foot is what shines.

After such a long trek, one assumes something will be broken. Hell, I can’t get minis from the upstairs closet to the game table downstairs on dice day without tweaking something. *grin* So to assume everything made it from the U.S. to Sri Lanka on the sprue to be assembled and then back to the U.S. without mishap is just being foolish. Broken stuff is pretty much the usual antennae or loose bits far from the main body of the model. It’s just too damn hard keeping that together, so to have to wrap & pad only means risk in breaking them. Some stuff was probably broken before it shipped, like the engine on one Devilfish. Still, easy enough to fix.

The anomalies in paint or assembly are what kind of blow me away. Overall, the assembly is well done. However, there are simply oddities I cannot explain. Like the mismatched paint and backwards assembly for one pair of aux burst cannons. Or the missing hatch & weapon mount on one turret. One Devilfish had an aerial assembled on it’s top in the back by the engines, (which is now broken and in need of repair), rather than on it’s snout like the 2 properly assembled Hammerheads. Of course, there’s also the pair of Firewarriors, one with no shoulder pad and the other with his upside down.

Of course, the one that I’m most concerned about is the blatantly missing XV25 Stealth Suit. I know it was assembled and painted. Somehow it didn’t make it into the box. I’m hopeful it will turn up. Again, percentage-wise, I’m shocked more didn’t go missing. Still, I sent home over, I want him back.

So there are still 4 XV8 Crisis Suits sitting in the studio, waiting on the last 2 to be assembled and painted for a total of 6. They have been through multiple corrections and are waiting final approval to be sent back. There is also a final Devilfish still to be assembled & painted. They should hopefully be joined by the errant XV25 mentioned above as well as 2 German StuG and 3 British Sherman Flames of War tanks. Soon, I hope, soon.

When the project began, (I’ll note it was an alternative project to the original Crimson Fists choice), Finecast hadn’t even been announced yet. Among the purchases were blisters of Kroot Hounds, intended to augment my speedbump units w/ 6-9 I5 attacks on the charge. Alas, Finecast was announced, metal pulled entirely and as they hadn’t been purchased yet, never would. Ultimately, the money I paid went to offset the return shipping, but I’m still bummed that if I do want hounds, I’ll have to pick them up on eBay, (not fond of Finecast am I).

Speaking of when the project began, I’d like to point out today is exactly 3 days past the anniversary date of when I announced the project. Yup, more than a YEAR since I boxed up 13lbs of minis and sent them away until they returned. As I mentioned above, some minis are still awaiting return and some minis never made it into the project at all.

It has been a tumultuous year for Painted Figs. Whether you believe the statements of the protagonist or those of his detractor, the simple truth is that PaintedFigs has a huge gallery of completed project albums, attesting to the work accomplished to date. Navin has also been courteous & responsive to my requests, even if it’s only been to let me know he doesn’t know and will get back to me. I would not intentionally dissuade anyone else from engaging PaintedFigs in a commission. Look through the gallery, look through the price list & decide if it’s worth it. I would, however, caution them on the complexity of the commission and/or the volume of work requested. In retrospect, I should have assembled the Crisis Suits myself and sent them over. I also should have sent the force over in smaller, more manageable chunks, since I was told the volume ‘overwhelmed’ the studio. I am happy to have the work done, but not happy with the time and ultimately the wasted expense of a program I didn’t really get my money out of.

The experience has also cemented the fact that I cannot trust anyone else to paint for me that I don’t already have some form of personal/professional relationship with, (Ap0k, SilverTabby, Tinweasel & misterjustin have already proven their worth to me in this regard). It’s one thing to ask an artist to paint something for you based on a theme and allowing their vision to carry the rest. It’s entirely another to require assembly and paint for a working army to be accomplished by a third party to an exacting standard which may or may no be within the skill set of the party in question.

In the end, I am glad to have the Tau fully painted. Once the fixes are complete and the Crisis suits here, I’ll be proud to put them on the table. It also inspires me to finish my 3 Broadside conversions and paint them myself. Finally, it has given me the impetus to get off my ass and accomplish some more painting of my own. It’s March now, so the question is can I finish 3000pts of Space Wolves and/or Necrons by August? Interesting challenge. 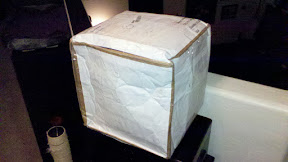