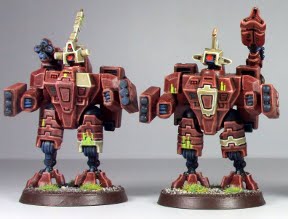 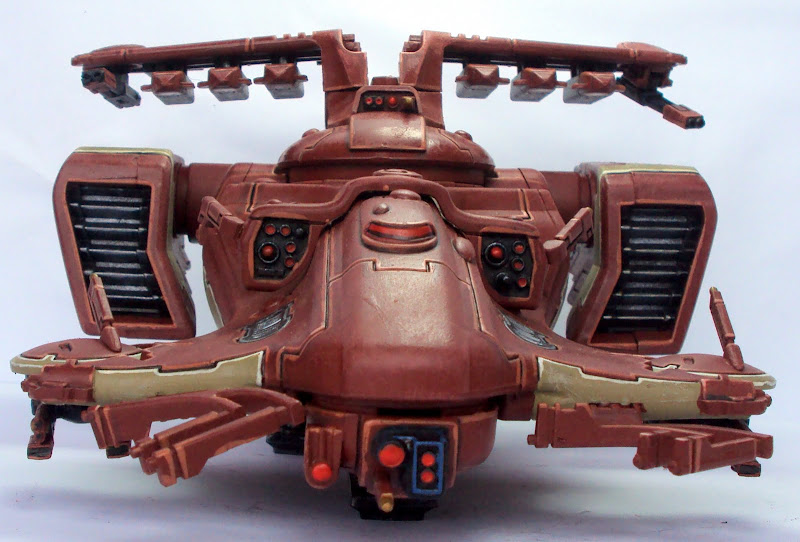 Holy smokes! My Tau are nearing completion! After a long and arduous journey, the Tau army I commissioned Painted Figs is nearing completion. I sent along a list of 9 flaws in the album I spotted, but overall I have to say that the Au’taal sept colours look terrific en masse. Terracotta and Khaki mix beautifully and the Scorpion Green accent colour really sets it off.

While I can’t say I’m happy with the amount of time taken, nor with the issues related to the size & scope of my request which I felt was handled well in terms of the amount of detail I provided, things could have been much, much worse. I didn’t expect them to be, however. I was very clear that there would be some give & take as well as some review and revision.

The real gap comes in having to chase the team down for updates. Navin has been fantastic every time I have inquired, however he has so much work going on that he cannot be proactive in notifying customers of the project status. I’ll save the full review for when the boxes arrive back here in the states, but I was so excited to finally have something to review after waiting 5 months that I had to update my slideshow widget at right and post a lil’ sumpin’ sumpin’ just to get me ironed out for the afternoon.

Ok, so I have actually commissioned work before, but that was a birthday gift and the talent was truly top shelf, (see here!)

I’ve been eyeballing the crew at PaintedFigs for a very long time, years now. As I have grown older and ended up with less time to do ALL the things I enjoy in my free time, I have pondered what it would be like, or cost, to have someone else put paint to the projects I want done. Like most older hobbyists, I have a closet full of models for a score of projects across half a dozen game systems. What can I say? Plastic & pewter is like crack for me. Anyway, a couple of years ago I began to hear good things about this service. Over holiday 2010 they advertised an opportunity to get discounted figs and painting for a club fee. At this point I jumped in and I will see how it fares over the course of 2011.

The best example I have, outside of my own, is a forum member’s description of their process on BarterTown. For myself, I can tell you that I have been planning, plotting, scratching, calculating, collating and generally being a right evil pain to Navin, proprietor of PaintedFigs. In the last 2 months I have organized 4 full fledged painting projects, 2 of which I was hounding him about regularly. During the course of this, I ultimately decided to allow project number 1 to be my Tau.

When Apocalypse launched in Oct 2007 a number of box sets became available which drastically undercut the cost ot the individual models packaged inside. You’ve already see the two Necron Monoliths I have built which were part of an Apoc box. I also picked up the Tau Armoured Interdiction Squadron, (2 Hammerheads, 1 Skyray), a short while later. Combined with a host of eBay purchases, I pieced together about 3500pts worth of Tau at 20% off retail or better. I’ve never really had a thing for the Tau. They don’t look 40K. If I want to shoot like hell I’ll play IG. If I want to assault I’ll play anything but IG or Tau. If I want to play Xenos I’ll play Orks or Eldar, (and soon Necrons!!!) But those are topics for my 40K blog, (which I’m still working on launching). Still, I honestly want to own and play each and every race in 40K. Dark Eldar are soon to be the only race I don’t own.

But what does this have to do with anything? Well, I knew I would never get around to actually assembling my Tau, let alone paint them. To that end, I have decided to box up 14lbs worth of minis and send them half way around the globe to let someone else do them for me. I’ve chosen Au’taal as my Sept as the color scheme should work very well for a majority dipped technique. Additionally, they are described as being, “known for their easy going attitude to their duty to the empire, and other Tau often regard them as lazy.” Damn if that don’t just fit me to a T! Of course, there’s a catch. I promised not to engage in another large project until I had finished one of my own. Enter said Necrons.

If you want to know more about the colors, products or army list this project is based on, well, I just gave you the links didn’t I? I’ll post more about the project as we get into the real work portion.